According to an announcement on Tuesday by the White House, President Joe Biden will be traveling to Europe next week to attend a special NATO meeting. The purpose of the visit is the on-going invasion of Ukraine by Russian President Vladimir Putin. During the daily press briefing, White House Press Secretary Jen Psaki informed reporters about the trip.

Jen Psaki stated that, “Later this month, President Biden will be visiting Brussels, Belgium. On March 24, Biden will be attending an important NATO summit to talk about the current defense and retaliation efforts to counter Russia’s unjust and unprovoked attacks on Ukraine and reassure the United States’ unwavering commitment to its NATO allies. Biden will also be attending a European Council Summit, where he will be discussing the shared concerns regarding Ukraine, shared efforts to enforce economic costs on Russia, provide victims of the conflict with humanitarian aid and support and work on other challenges associated with the conflict.” 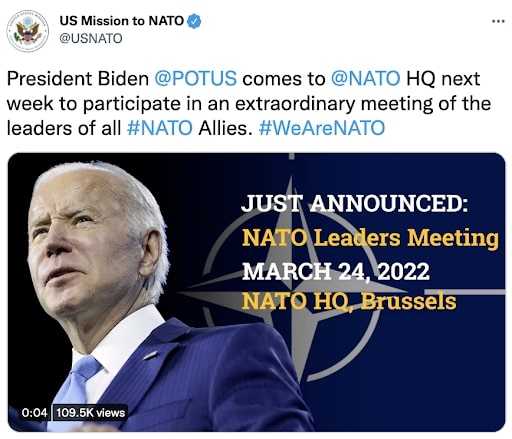 Last week a Russian drone flew into Poland, which is a NATO country, after it finished inspecting the damaged site in the city of Yavoriv, Ukraine. After returning to Ukrainian airspace, it was immediately shot down by Ukraine’s military. Americans hold their breath every time Joe Biden visits another country. At the coming NATO summit, will Biden actually do something useful? Or will he just embarrass the U.S. again?