As Joe Biden helplessly struggles from one crisis to the next, Barack Obama has been taking a more public position as the actual leader of the Democratic Party recently. As Obama has moved from his latest book tour to taking an active role in trying to save Biden’s “Build Back Better” radical leftist agenda, many Democrats appear pleased to have the “old boss” back in the fold.

The Washington Examiner cited the political reality facing Democrats on Sunday as described by analyst Dan Schnur, who said that any Democratic candidate who needs any help from swing voters “needs” Obama now. Schnur used the election about to occur in Virginia as a prime example and a preview of what will happen in next year’s midterm campaign season. Obama is expected to be a more critical ally and endorser than Biden. 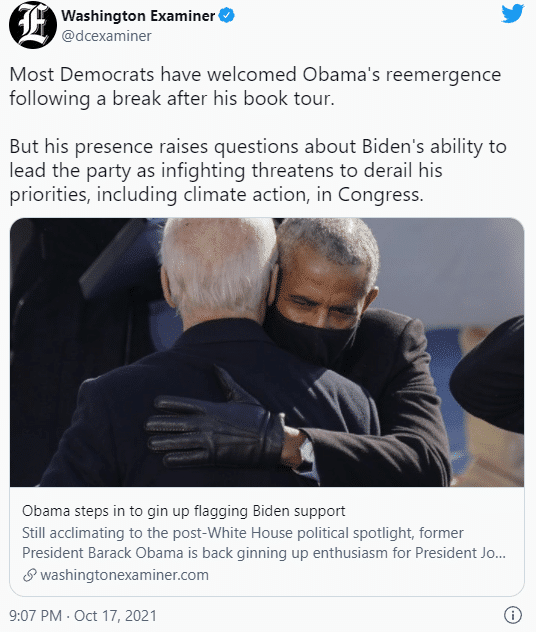 The Virginia gubernatorial race is a powerful example, as former governor Democrat Terry McAuliffe is expected to rely heavily on Obama’s presence in the final days of his campaign leading up to the November 2 off-year election.

Obama’s resurgence comes as Biden’s approval ratings are falling like a rock. Zogby’s latest poll of likely voters indicates that the president’s job performance rating has hit a new low of 36.4 percent. That compares with Obama’s approval rating at a similar point in his first term of 52 percent.

The return of Obama as an election season presence follows his statements to Biden that he “didn’t have to run” for president to protect his legacy. Obama’s notable absence followed that during the Democratic primary season.

Of course, Biden is striving to enhance the public’s impression of his relationship with Obama, such as it is. White House Press Secretary Jen Psaki recently said that the two are great friends and “engage regularly.” Biden allegedly talks with Obama about a “range of issues.”

As next year’s crucial midterms come around, it will be interesting to see if Obama involves Biden as part of his work to save what is likely to be a Democratic Party looking for any way possible to hang on to control of Congress.