Last week, Joe Biden earned the outrage of half the nation during a campaign event in Maryland. While speaking, Biden declared he doesn’t respect “these MAGA Republicans.”

He didn’t stop there, though. The same president who spoke about turning down heated political temperatures said the millions of Americans who support former President Trump are “semi-fascist” and dangerous to democracy.

This came as Biden rallied Americans to get behind Democrats in the upcoming midterm races.

Many Trump supporters responded to Biden, however, letting him know the absence of respect is a mutual feeling. Now, the Democratic National Committee (DNC) is coming out in full support of Biden’s statements on “MAGA Republicans.”

The DNC on MAGA Republicans
While speaking with Face the Nation, DNC chair Jamie Harrison was clear the Democratic establishment is fully behind Biden’s claims about Republicans.

Harrison was questioned on how Biden’s remarks of Trump supporters being “semi-fascist” square with his inaugural address statements about Americans being neighborly to one another.

"Biden said [in his inaugural address] we should not view each other as adversaries in this country but as neighbors…how does 'semi-fascism' as a label for the Republican Party fit with that?"

The DNC chair responded by saying Biden has a pattern of “consistency.” After declaring that Biden “[said] it plain” to Americans, Harrison also claimed “MAGA Republicans” have launched an assault on freedoms.

When asked by Face the Nation if Democrats accept talk that deems the Republican Party as “semi-fascist,” Harrison claimed this is simply calling the GOP “what it is.”

Real Fascism in America
The DNC’s and Biden’s claims that Trump-supporting Americans are “semi-fascist” isn’t going over so well.

Last year, when the president tried to force people to take COVID-19 vaccines or lose their jobs, many Americans viewed this to be dictatorial and fascist.

When COVID-19 patients in New York were put into nursing homes with vulnerable elderly patients (who later died) on the watch of a Democratic governor, critics viewed this as having fascist leanings as well.

There is no place for violence in our political discourse, and the GOP will not be intimidated. pic.twitter.com/fmiiMVmi0t

The left-wing charge that Republicans are “semi-fascist” comes from a party that’s spent the better part of two years advocating for shutdowns, keeping children out of schools, forcible business closures, mask mandates, and COVID-19 vaccine mandates.

In some communities, to this day, vaccine mandates are still a factor. In many cases, left-wing fascism happens under the false guise of protecting people and promoting “the greater good.” 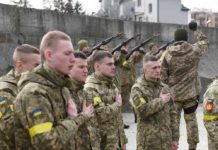